There’s no debating that modern day metal, though boasting the reputation of a largely inclusive community, is still something of a boys’ club. However, that’s not to say that women have not made an impact on the genre. On the contrary, the involvement of women in metal dates back to the inception of the genre itself, and our presence and passion continues to be a driving force moving forward.

Unfortunately, our male counterparts do cast a pretty big shadow, and sometimes it’s all-too-easy to lose sight of female excellence amid the masses. Luckily, music journalist and fellow metal fan Addison Herron-Wheeler has done her research and compiled some of the many empowering stories of trailblazing ladies in metal into one kick-ass little book, entitled Wicked Woman: Women in Metal from the 1960s to Now. Whether you’re a proud metal-headed woman looking to spread the tales of your sisters’ achievements, or just a heavy music enthusiast interested in exploring all aspects of the genre’s history, Wicked Woman is an interesting and informative read, and comes highly recommended.

Though a quick read, Wicked Woman manages to cover a whole lot of ground. Herron-Wheeler does an excellent job of compartmentalizing a rich and extensive history into a succinct chronology in a way that does not compromise on detail. Assigning a specific subgenre to each of its nine chapters, ranging from the rise of heavy metal to death metal to modern-day doom metal and everything in between, Herron-Wheeler introduces a further element of organization to her work that eliminates the dependence on linear narrative and creates opportunity for flexibility on the part of the reader. While one may choose to sit down and devour Wicked Woman front-to-back in one go, there is also much value in dissecting the book section by section and in taking the time to delve into the discography of the bands of which it makes mention. The beauty of Wicked Woman lies in the fact that it is formulated in such a way that allows for and encourages this sort of parallel exploration, much like you would explore the music itself. 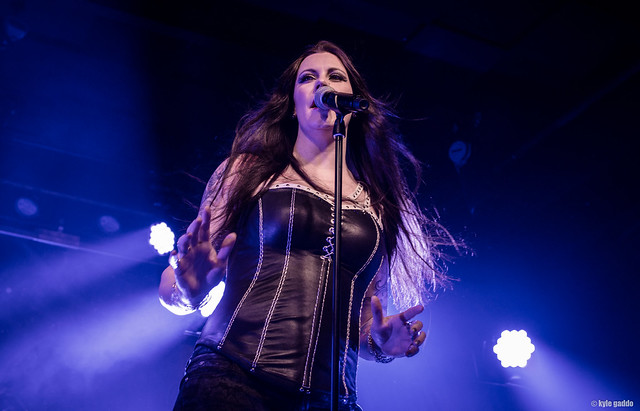 Wicked Woman is much more than an encyclopedia of female-fronted bands in metal, however. In her foreword, Herron-Wheeler vows to not take a strictly musical approach to her analysis, and she makes good on her word. Compiling a myriad of stories and testimonials from women in the metal scene from its inception until present day and presenting them alongside accounts of public reception, Herron-Wheeler effectively sheds light on how attitudes towards women have adapted and evolved over the past fifty years. In doing so, Wicked Woman opens a dialogue on larger societal issues, and focuses not just on the journey of women in metal, but on the journey of women, and of society, in general.

Obviously, there’s still progress to be made, but Herron-Wheeler urges readers to take a step back for a moment, as she summarizes in the tail-end of her foreword:

“Cast aside, at least for the time it takes to read this book, the multilayered divisions in the metal scene and the feminist community, and remember why you originally were drawn to women’s issues, or how you felt when you heard heavy music for the first time. Then read on to discover the complex and fascinating relationship between women and heavy metal.”

In documenting some of the many stories of women in metal, Wicked Woman serves as a reminder that, though while women have not always been front and centre within the metal community, they have always been a part of it, and will continue to make their presence felt moving forward. Representation is indeed important, and Herron-Wheeler does a great service to the community by shining the spotlight, if just for a moment, on some of the many unsung heroes of metal.

Wicked Woman: Women in Metal from the 1960s to Now by Addison Herron-Wheeler is available for purchase on Amazon. You can purchase it in a paperaback or Kindle-ready digital version, for $7.00 or $2.99, respectively, here.