Lets get one thing clear; 2011 was a gnarly year for music, and regardless of what I listed and what was missed, this year provided a shit ton of albums that made this a year we won’t soon forget, and one that will be hard to top. I originally had a top 20, but decided to dwindle it down to just 10. Of course this lead to cutting out a bunch of great albums, but I wanted to focus on the ones that actually stuck with me and gave me more than just a “Wow, that sounds cool!” reaction. Anyway, 2012, you have some big shoes to fill. Now without further ado, here are my picks for the top 10 albums of 2011…

10. Spaces – Nothing Exists but Atoms and the Void

Hands down, my favorite instrumental album of the year goes to Brooklyn based rockers, Spaces. A blend of post/progressive-rock and experimental nuances, they take all the highs of bands like Russian Circles and If Theses Trees Could Talk and combine it with their celestial touch to produce an album that is both beautiful and moving. This album flows so smoothly from track to track, you’ll find yourself getting lost in its intricate tranquility.

Favorite tracks: “Edge of Forever”, “The Crown of the Sun”, “Depths”

I tend to think of Uneven Structure as TesseracT’s bigger brother. Their sound is similar, but Uneven Structure take a more darker and heavier approach to their music. They create vast landscapes of ambient sounds that overlay and wrap around thick, chunky riffs, to give the listener one hell of an incredible journey from start to finish. Februus took over 2 years for it to finally be released and it was worth the wait, and while it doesn’t grab you on your initial listen, give it some time and you’ll start to grasp the beauty of this album. I believe our fellow heavy blogger Gein said it best in his review: “Februus is a living, breathing behemoth of a record that gives listeners a reason to believe in a genre that’s becoming incredibly derivative, while also paying respect to the art of production.” I couldn’t agree more.

Hailing from Chicopee, Massachusetts, this five piece outfit has breathed life into the post-hardcore genre, and not by re-inventing it, but by sticking to the tried and true formula and releasing one of the most aggressive EPs of this year. Simply put, the entire demeanor of Cagebound is extremely angry and pissed off, and in its 21-minute runtime, it manages to display so much passion that you can’t help but listen to it and feel what this band must have felt when writing these songs. Each track just permeates with their blood and sweat, and while sharing similarities to that of a bands like Converge and The Chariot, this EP manages to achieve what a lot of other bands could only hope to do with a full-length. It’s a bittersweet affair though, as Cagebound is With Words final album, as their career came to an end on December 11, 2011. At least they went out on a high note.

Scars is Ringworm’s fifth full-length album, and if you’re already familiar with these guys, then you know what to expect. With the production complementing the music’s raw and aggressive nature, Scars is easily one of the top hardcore albums of the year, so much so, that it made it into my top ten. It’s rare and refreshing to see and hear a band of this magnitude retain everything that made them what they are, and Scars is a metallic hardcore masterpiece, with a nice dose of thrash and a bit of groove thrown in for good measure. So, with a bit of nostalgia for early 90′s metal (with certain moments resembling that of Slayer), Scars is an enjoyable listen that will evoke metal heads and hardcore kids, both new and old alike, to bang their heads to these destructive and aggressive tunes.

I wasn’t completely enamored by Last Chance To Reason’s debut album, but Level 2 took all my worries for their new album and smashed them to pieces. This album is a beautiful mix of synths, jazz grooves, blast beats and odd time signatures. I’m also a sucker for concept albums, especially those that actually tell a good story and portray it well through the music, and Level 2 does not disappoint on that front. In fact the album is so smooth with it’s transitions, the entire flow of the album is one long track. From the wide range of vocal techniques of Mike Lessard, to the technical and catchy as hell instrumentation from the rest of the band, Level 2 is their magnum opus. Time will tell if LCTR can top this beast of an album.

Last year, TesseracTs EP took my number one spot. This year, they dropped a few pegs, but in no way does that mean One isn’t as great. For the most part, it still contains the mouth foaming, jaw dropping tunes from the Concealing Fate EP, but also a handful of new TesseracT tunes that are as equally impressive. I’m not as big of a fan of djent as I used to be, then again I was never a rapid fan to being with, but for some reason, TesseracT just blows my mind. Their music is just smooth, clean and presented in such a grandiose way, the end result is ear-gasmic. But what really pushed this album to my top ten, is solely based on what I still feel is the greatest song of the year, “Eden”. That song is so goddamn powerful. I know Elliot Coleman has taken over the reins as their frontman, and while he is a solid vocalist, his rendition of “Eden” just doesn’t compare to when Dan Tompkins was at the helm. I can only wait with bated breath for new material to get a definitive opinion on the change of singers.

Trap Them haven’t lost their touch at all, having crafted (no pun intended) an album worthy of keeping them at the top of the hardcore/crust scene. This is easily their angriest, frenetic and most evil album of their career. Darker Handcraft goes straight for the jugular as the opening track “Damage Prose” quickly assaults the listener with the ferocity of guitarist Brian Izzi, the rapid drumming of Chris Maggio, and the hardcore/punk-infused vocals of Ryan McKenney. Each album of theirs is a sonic force of music that’s furious, dark and raw, and their latest, Darker Handcraft is no different. To be blunt, I love this band!

03. Touché Amoré – Parting the Sea Between Brightness & Me

This isn’t your standard hardcore album full of chants and tough guy attitude, in fact it’s the opposite. The only vocals you hear come from Jeremy Bolm, and that’s it. Between the music and the voice of Bolm, you can sense the high amount of emotion brought forth by both these parties. Parting the Sea Between Brightness & Me will not win anyone over on the first listen, in fact I was hesitant upon my first play through of it. It wasn’t that I disliked it, far from it, it just needed time to sink in to be fully appreciated. At just over 20 minutes, this album keeps things short and to the point, with no added filler or fluff. They come in, make their point, and then move on. The factor that will either make you love this album or hate it is the lyricism. Bolm has the ability to convey truth through his words, with his shouts being the hammer that bashes them into your head. Parting the Sea Between Brightness & Me is a powerful album, without being overly heavy or overproduced. This album is what music is all about.

It took some time for me to listen to this album, and I could kick myself right now for not getting to it sooner. It didn’t hit me right away, a few songs grabbed me, but overall it didn’t “wow” me. It was only after a few spins of the album, listening to it all the way through, that it really began to grow on me. After reading fellow heavy-blogger Noyan’s review on Bilateral, I’ve come to see just how right he was in the diversity of this album. It blends the characteristics of bands like Opeth, Tool and Dream Theater, but at the same time Leprous still have a sound all their own. It’s a progressive metal masterpiece, and an album I’m glad didn’t slip under my radar.

It’s as if I already knew this album would be my number one pick only after a few listens. Finland’s Unkind are a metallic hardcore/punk band with a d-beat and crust foundation, and rather than just being another run of the mill hardcore band, Unkind display why they are different. Their latest album, Harhakuvat, hits hard on an emotional level as its dark and ominous tone becomes a dirge for ones inner psyche. The album runs shy of the forty minute mark, but the albums eight tracks make it seem as though it’s much longer. This is achieved by them layering atmosphere on top of atmosphere as each individual track continues the unrelenting nature of the one that preceded it. Unkind have made quite a strong statement with Harhakuvat. While perhaps not as widely known as fellow bands in the same scene (at least here in the states), they have taken a unique stab at this style of music and the outcome is a breath of fresh air in what can easily become a stale and stagnant sound. Other than Trap Them’s Darker Handcraft, this is easily one of the best hardcore/crust-punk albums to not only be released this year, but in a very long time.

More “Best of” and Honorable Mentions for 2011:

Best Song of the Year

All Pigs Must Die
God Is War 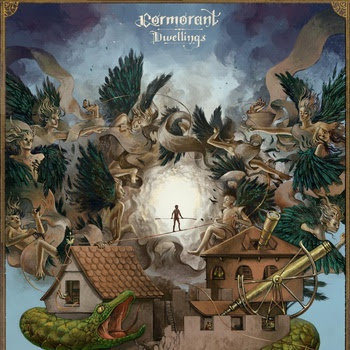 The Matador
Descent into the Maelstrom

Architects
The Here and Now

Scale the Summit
The Collective

Honorable Mentions (in no particular order)

This was a monumental year for music (especially the heavier side), and in light of that, I’ve decided to list a few more albums that kicked ass this year and are well deserving of acknowledgement.

Blotted Science
The Animation of Entomology

East of the Wall
The Apologist

All Pigs Must Die
God Is War

dead in the dirt
Fear

The Atlas Moth
An Ache For The Distance

Today is the Day
Pain is a Warning

The Matador
Descent into the Maelstrom

Pianos Become The Teeth
The Lack Long After

Full of Hell
Roots Of Earth Are
Consuming My Home

Between the Buried And Me
The Parallax: Hypersleep Dialogues