Last night, I slept at around 4 AM. I was talking with some friends on Skype and watching TV shows, and I didn’t need to get up early in the morning, so I figured I might as well stay up, right? Wrong. I was awakened by freaking birds at 7 AM. I have a balcony, and for some reason 7+ birds were perched in my balcony, making that weird guttural bird noise. At that point I knew my day was going to be terrible. Once I wake up, I can’t sleep back, that’s just how I am. I thought this day couldn’t get worse. Oh how wrong I was.

I went to work, and I had to also pick up food for a noon meeting on the way, but the place making the food was 30 minutes late to provide me with the food, and then I almost got a parking ticket. I parked my car in the lot at work, but I had to carry a huge box of food about halfway through campus, and it was raining like crazy. Obviously, I can’t carry an umbrella and the huge box of food, so I got soaked. Great day, right? Oh, and also, the food place forgot to put in the sandwiches that I like, so I had to eat a weird curry tuna salad sandwich with pickles, and I hate pickles. But that wasn’t the lowest low point of the day.

Soon after, it came to my attention that Metallica and Lou Reed‘s collaboration ‘album’, Lulu, had become available for reviewing. It sounded really bad in the previews, but how bad can it actually be, right? I decided to do a second opinion review, because why not? Well, as I clicked on the first track, “Brandenburg Gate”, I was greeted by a very upbeat and mellow acoustic guitar chord (that sounded like it was being strummed by someone having a seizure) and Mr. Reed started singing with a total lack of regard for any sense of melody, harmony or phrasing. Here’s what he said:

What the fuck?! I almost spewed my coffee onto my monitor. This was probably the worst thing I’ve heard all year, and that includes Design The Skyline. I thought that maybe they accidentally forgot this part on the album or something, because Mr. Reed sounded like he was tripping on acid. Alright, I told my self, let’s ignore the terrible non-singing and focus on the other aspects like lyrics and instrumentation. I tried to imagine these lyrics being some kind of allegory, perhaps they had some greater meaning? Probably not. They sound like bad poetry attempts written by a senile man who has consumed way beyond lethal doses of LSD. Which is probably exactly what happened.

Now here’s the weird thing: some of the background music sounds like a bad Metallica album. Bad as in “we wrote all these riffs during our career and most of them were so bad that we stored them in a file cabinet somewhere and forgot about them forever”. James Hetfield occasionally drops in to sing a few completely unrelated phrases about furniture, and it’s good to hear that at least one person singing on this album has some understanding of how music works. That person isn’t Mr. Reed, by the way.

This album sounds like Mr. Reed somehow stumbled upon Metallica’s secret file cabinet of bad riffs, stole all the tapes in there, cut and pasted them together, and then got shitfaced and read some of his bad poetry over it while trying to shrug off a hangover. Believe me when I say that a tone-deaf alligator with no musical training – formal or otherwise – would sound better than Mr. Reed when it comes to his ‘vocal work’ on this album.

Maybe I’m being too hard on old Lou? Well, I tried to be more appreciative, but this red liquid pouring out of my ears can’t be good, right? I decide to listen to “The View” again, and compared to the first track it’s like listening to Obscura after listening to Justin Bieber. This song has some southern stuff going down, with is gloomy main riff that plays a million times over while Mr. Reed spouts his batshit crazy bullshit. I can’t imagine James Hetfield just sat there and played the same riff for what feels like approximately one million minutes. Not only that, but there is the lyrical moment of clarity/idiocy that has already become famous:

I believe James Hetfield stumbled upon Mr. Reed’s stash of psychotropic drugs at some point, thought they were snacks, and ate truckloads of them and then was inspired to write this song. It explains the constant repeating riff (he was probably rocking back and forth and staring blankly towards a while during that) and the brilliant/horrendous lyrics. I can’t take this anymore.

I decided to go upstairs to the coffee room and make myself the following beverage: 3 shots of espresso, nothing else added to it. Yes, this is in addition to the coffee that I was drinking while I first started listening to this album.  I believe this is the only thing that will get me through this day at this point. Perhaps I should also seek the substances that Mr. Reed is in possession of too? Maybe then this whole thing will make sense? Probably not.

Next up is “Pumping Blood”. Now, this song was actually performed live together by Metallica and Mr. Reed, and I kind of wonder why hasn’t anyone stoned them to death to prevent this travesty back then. It still sounds like a bad Metallica forgotten song ‘improved’ by Mr. Reed’s lyrical anus:

Now, I understand that Mr. Reed is trying to go for some urban-dark tale of some kind of demented hooker, but his delivery is totally wrong. He sounds like a dying old man seizing during his death throes. At this point I wonder, who the fuck approved of this? Like, don’t Metallica have managers or something? How did anyone listen to this and think that this was actually releasable as a product? Did Mr. Reed stumble upon photographs of Metallica members engaging in sexual activities with each other in the hidden cabinet, and threatened to expose them if they didn’t make ‘music’ with him? I think if any such photos existed and were released, they would be less hurtful for Metallica’s image and my sense, even if they were wearing furry costumes and performing a reenactment of The Godfather. 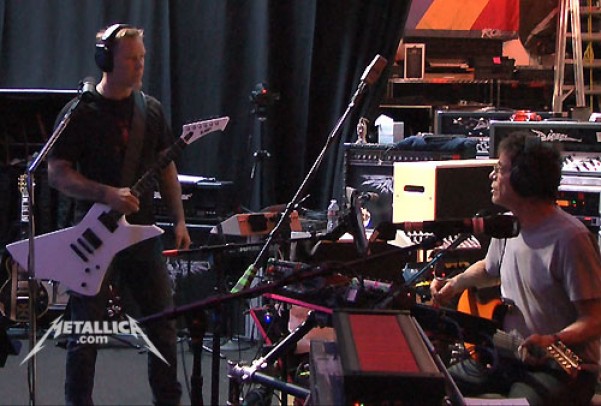 I mean, look at James! He seems like he’s going between “I want to murder you” and “Are you fucking kidding me?” Also, what is a Haken Continuum (the amazing musical device used by Dream Theater keyboard player Jordan Rudess and no one else on the world) doing there in that picture? Does Mr. Reed faceplant into the Continuum to come up with vocal melodies? That would (not) explain it. Wait… what did Mr. Reed just say?

FUCK THIS SHIT. WHAT THE FUCK IS THIS?

This sound sounds like Mr. Reed stole a riff Metallica stored in the cabinet, put it on repeat forever, and then started breaking keyboards until it sounded sufficiently awful, and then graced it with his divine poetry. I don’t think I’m putting enough emphasis on how bad he sounds. It sounds like Mr. Reed wrote songs, sung on top of them while drunk out of his mind and jogging and having a heat attack, and then cut out the vocal tracks from those and randomly pasted those tracks on these ‘Metallica’ ‘songs’. I go to get another coffee.

“Iced Honey” actually starts out like a decent song. Is Mr. Reed fucking with me. I can’t really know for sure. Maybe he’s actually a genius mastermind and trolling the entire world, but probably not. Fine, this actually sounds like a song (actually it sounds like two songs, because Mr. Reed’s vocals have nothing to do with the melody of the song), except for the fact that it’s ONE SINGLE RIFF FOR FOUR AND A HALF MINUTES. Really? Why does this thing exist? At least Hetfield sings a little bit and my brain is saved from immolation.

The last song is “Cheat On Me“. This song is ELEVEN FUCKING MINUTES. Ok, I have to share this with you. So, I’m looking up the lyrics of these songs on some Metallica fan site, and here’s what they had to say about this song:

“It would seem the band and Reed had a perfect day when they got together for the recording sessions as Cheat on Me hits the mark!”

There are two explanations for this.

I don’t even know what to say about this ‘song’. Don’t listen to this. Please. Just forget that this album never existed.

There are four songs on disc two, ranging from the length of eight minutes to nineteen and a half minutes. I’ll be honest here, I didn’t listen to disc two. I’m sorry. I just drank two more cups of coffee and started writing this review. Alright, I lied. I did listen to it. I didn’t want to admit it. I feel like I’ve been dosed with hallucinogenic substances and violated. Why did you do this, Mr. Reed? Why have you done this to humanity?

I want to personally go and spend my life savings on obtaining every single copy of this album and dumping them in a pit of acid, then burning the remains and tying a piece of concrete to my foot and jumping into the sea. At least I will have done humanity a service. Here’s my score:

Please, please don’t listen to this/5