We have again arrived on the negative side of scratchy band logos. Those who have stuck it out so far have seen some highs and some lows, experience emotions they’ve never felt before, and exercised muscles they didn’t know they had. Now we get into the really nitty-gritty. The worst of the worst. The creme de la creme of faux textures, distressed fonts and cheesy photoshop warp filters. Here are the worst scratchy band logos numbers 5 through 1.

This one is tough because I love All Shall Perish so much. However as I said to the kids I bullied in elementary school, I tease you because I want you to be better. Everyone knows that you should stay away from warp effects in photoshop. Unfortunately whoever created this textured monstrosity missed that memo. I’m not a fan of blackletter typefaces to begin with and the stretching and vectorization of this one did not lead to a pleasing result.

I wouldn’t be surprised to see this on a flag flying above a pirate ship, but not a Johnny Depp and Keira Knightley pirate situation, I envision a ship of Somali pirates who have the sniper’s laser bouncing around the inside of their eyeball. I understand why the designer was going for a pirate-esque look, after all, the band is named after the sea and the treachery it brings. The execution leaves something (a lot) to be desired though. The letterforms are kind of awkward, the C is oddly shaped and the tentaclesque additions don’t really add anything. Most of all though, the T is ridiculously bold while the Y floats off to the right like a man who has just walked the plank.

All this to say, remember in the movie Hook when they threw that guy in a box and then slipped scorpions in there with him? That part always terrified me.

One of my big beefs with scratchy logos is when they use some sort of distressed font as a base but the designer doesn’t bother to redraw the letters so that each one is unique. Exhibit A would be the ABRB logo. The L’s, B’s and A’s are almost exactly the same when they repeat. Whoever drew it had the decency to change the second O but it’s too little too late. When the aim is to have a finished product that looks like something that was scrawled violently on a wall in blood, the fact that the letters are duplicated perfectly on a computer kind of ruins that effect.

On another note, the whole thing has a weird upward slant that throws me off. It’s crooked enough that I notice it, but not enough that it looks intentional. It just ends up looking like a mistake. In a world where it’s so easy to draw a straight line there’s not a lot of excuses for having a crooked baseline for your text. 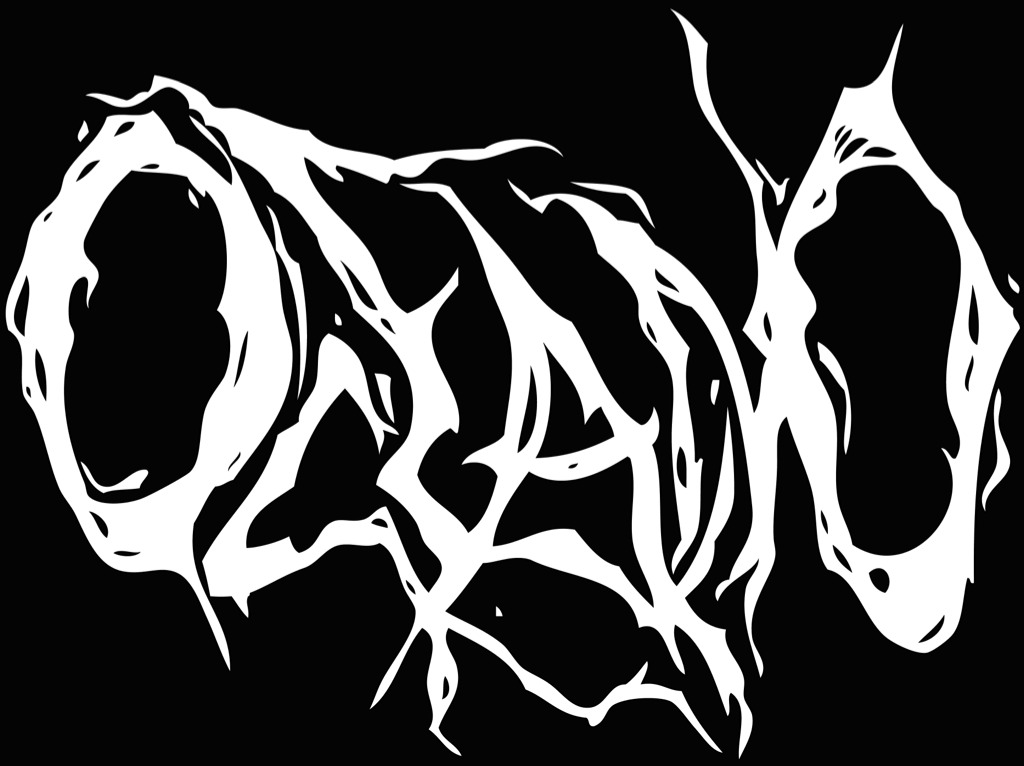 The Oceano logo evokes in my mind vivid and powerful imagery. Snippets and memories flash before my eyes when I look at these wiggly little letters. It’s like being trapped in a waking nightmare. My first thought is of an oil spill. BP would look at this and realize that their little Deep Horizon snafu was pretty minor in comparison. The vivid black and white contrast looks like sunlight shining off the oil coating a baby duck’s feathers as it suffocates. An experience very similar to listening to an Oceano song.

The next image that I see behind my eyes is strands of discarded toilet paper in a scuzzy rest stop bathroom. I feel like at any moment a foot is going to slide into my stall from the outside and some guy named Bubba will try to have his way with my posterior regions. The E is a particularly strong example of the toilet-papery-ness of the logo.

As for the mechanics of the letters themselves, the N is very weak and carries no impact, the C is squeezed into a tiny little space, and even though the texture is light and the letters are fairly simple, it is not very readable.

We have reached the end of the worst. Hopefully you kept most of your vomiting restrained to a suitable receptacle, but I would understand if your cat wandered into the splash zone.

Straight up, the Carnifex logo looks like one of those cheesy pumpkin carving designs that come in the cheesy pumpkin carving kits. If there was a witch holding a black cat in front of a full moon above it, I would not be surprised. Apparently, the straight line impaired person who did the As Blood Runs Black logo drew this one as well but switched up the direction of the slope. I mean, this is clearly done in Illustrator with the pen tool, Illustrator comes with a built in grid, rulers and guides. How do you create something that is crooked? I’m actually having trouble coming up with a coherent way of describing how much I dislike this logo, so here’s some random thoughts that run through my mind when I look at it; things that soccer moms think are spooky, Casper the friendly ghost and a guido’s belt buckle. Actually I just thought of a way to describe it. Remember that computer game Worms 2? This logo looks like the cheese level after you were finished blasting it apart with the Holy Hand Grenade, if only there were adorable worm voices to make the experience a little more pleasant.