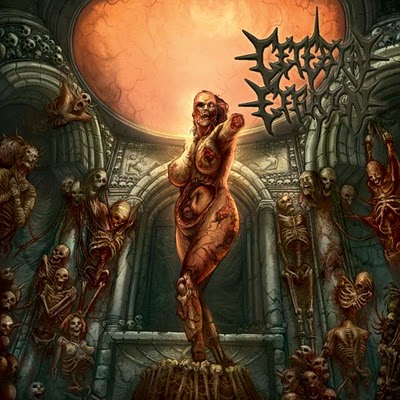 Sweet Jesus god damn my face has been ripped off, raped, strangled, set on fire, stabbed, buried alive, dug out, and raped again. Cerebral Effusion put out their 3rd album Impulsive Psychopathic Acts back in March, and at the time I wasn’t sure what to think of it. But now that I’ve gathered my thoughts and I’m off of that long break, I almost know where to begin.

First and foremost, this album is brutal death metal. It contains some slams and some fairly technical sections. But, when I say this album is brutal death metal, I mean it is BROOOOOOOODAL death metal. Nary a band will ever reach this amount of heavy, in fact, I can count the number on one hand. But here is Cerebral Effusion, a pretty unknown band blasting out from the woodworks with the power of 8,952.5 raging rhinoceroses on steroids wearing steel forged Dwarven armor with +12 defense, 32 fire damage, 33 ice damage, and 40 drain health on target. Yes, this album is really fucking heavy.

This album adds nothing new to the genre, but that’s all fine and dandy as they ad their self to the ranks of the ultra heavy. It’s filled with chunky muted staccato riffs, weird harmonics, dissonant lead work, and furious gurgled vocals with a pounding rhythm section that will blast faster than a crankshaft spins (drums are sadly, over produced). For any fans of bdm, this album is a must and one of my favorites this year so far.